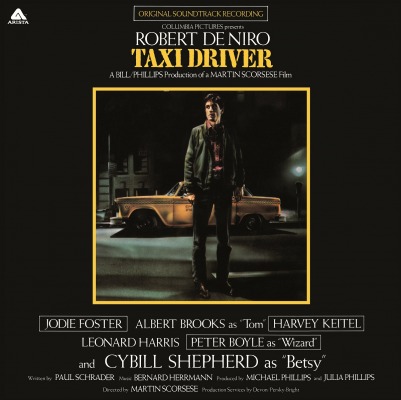 * This new Taxi Driver soundtrack release is a re-mastered version of the now quite rare Arista label Taxi Driver vinyl LP (AL 4079) that was released in 1976. Both the new release and the 1976 Arista release contain ten identical tracks.

Bernard Hermann was used often by Alfred Hitchcock to compose the scores for his movies and is considered Hitchcock’s favorite composer. He is perhaps most famous for his scores to Psycho and Vertigo, although in many people’s eyes Taxi Driver is right up there. It was after all ranked #63 in EW’s 100 Best Movie Soundtracks.

Sadly, Taxi Driver was Hermann’s last ever score. He died just a few hours after completing it.

This vinyl soundtrack is available on Ebay at the link below: